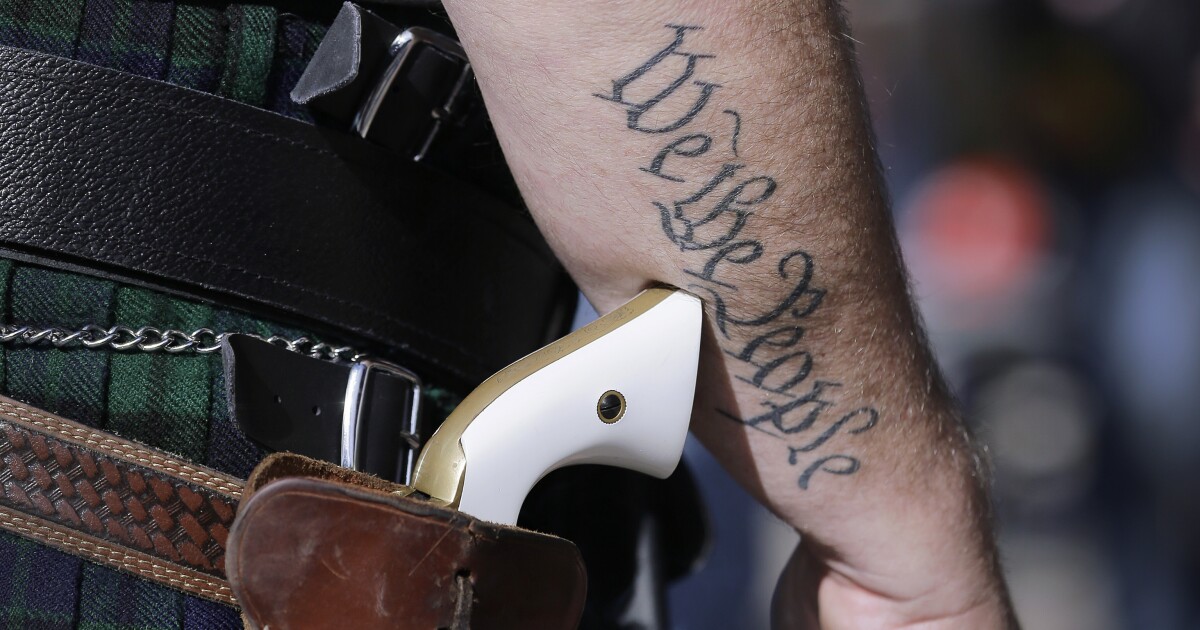 California’s gun laws are widely viewed as some of the strictest in the country by advocates on both sides of the gun-control debate. But a new Supreme Court ruling puts a number of those laws on shaky constitutional ground.

California imposes a similar requirement for obtaining a concealed-weapon license from the local police or sheriff’s department, along with a long list of restrictions on who can carry a gun and where it can be carried.

Some of those restrictions — for example, the one banning guns in state government offices — aren’t likely to be affected by the ruling, which says the government’s ability to ban guns in “sensitive places” is “settled” law. But other limits on carrying weapons outside the home could wind up in the legal crosshairs.

Dr. Garen Wintemute, director of the Violence Prevention Research Program at UC Davis, said research shows that Americans are no more likely to commit assault than the residents of other major industrialized nations. “Where American exceptionalism kicks in,” he said, “is our unique access to a technology that changes the outcome” of those assaults.

California’s gun laws, he said, are part of a web of measures that have reduced gun deaths dramatically in the state over the last 30 years. And because of that cumulative effect, it’s hard to evaluate the difference made by any laws on their own.

Nevertheless, Wintemute said, allowing more Californians to bring a handgun into public spaces will probably result in an increase in gun violence. “To the extent that that tool is made widely available in situations in which it is not [currently] available,” he said, “we can reasonably expect that it will be used.”

Who can get a license to carry a gun?

Out-of-state permits and licenses to carry concealed weapons are not valid in California. To obtain a concealed weapon license here (or a license to openly carry a weapon in a county with fewer than 200,000 residents), state and local authorities require you to jump through a number of hoops that could conceivably run afoul of the ruling in Bruen. Those restrictions vary from county to county and city to city.

The most significant hurdle is having to demonstrate “good cause,” which state law defines as “sufficient evidence of potential danger to life or of great bodily harm to the applicant, his or her spouse or dependent child, which cannot be adequately dealt with by existing law enforcement resources and which danger cannot be reasonably avoided by alternative measures, and which danger would be significantly mitigated by the applicant’s carrying of a concealed firearm.”

The Los Angeles County Sheriff’s Department put it this way in its policy statement: “No Carrying a Concealed Weapon License (CCW) should be granted merely for the personal convenience of the applicant.”

Determining good cause is a judgment call that varies according to who’s making it. For example, L.A. County Sheriff Alex Villanueva announced in mid-2021 that he wanted to quintuple the number of licenses his office issued by speeding up the reviews and making the good-cause standard “achievable.”

The majority decision in Bruen, by contrast, says that the 2nd Amendment requires no such showing of special need, just as the 1st Amendment doesn’t require a special need in order to speak or exercise religion freely. As a consequence, Thomas wrote, New York’s approach “violated the 14th Amendment in that it prevents law-abiding citizens with ordinary self-defense needs from exercising their right to keep and bear arms,”

California’s restrictions on concealed-weapon licenses don’t stop at “good cause,” however. It’s not clear how these additional limits might be affected by the ruling in Bruen.

Applicants must also demonstrate “good moral character,” which isn’t defined in state law. How to pass that test varies across the state; Sonoma County, for example, asks applicants to submit three character references, while the city of Sacramento requires applicants to pass background checks by the FBI and the state Justice Department.

Finally, counties get to decide who’s old enough to carry a concealed weapon legally. The state minimum age is 18, but you must be 21 to get a license in L.A. County.

Applicants for concealed weapon licenses must complete at least eight hours of training in firearms law and safety, but the state leaves it up to local authorities to decide which courses are sufficient. Those authorities may also decide whether to require applicants to undergo psychological testing.

The requirements for a license to carry a gun sit atop the many state rules restricting who can possess a firearm. The application for a concealed weapon license lists 43 different types of misdemeanor convictions that will cause you to lose your ability to possess a firearm for 10 years, plus one that results in a five-year suspension, and five types of misdemeanors that cause a lifetime ban.

Being convicted of any felony in California will cost you your right to buy or possess a gun for as long as the felony remains on your record. Misdemeanors and most felonies can be expunged by petitioning a court, but there’s no guarantee a judge will grant the relief.

Those restrictions may not be threatened by Thursday’s ruling, given that the case centered on the ability of “law abiding” citizens to obtain gun licenses.

When is a license to carry a gun necessary?

The state has so many laws regulating guns and ammunition, it took the California Department of Justice almost 40 pages just to summarize them in 2021. According to the department, if you’re 18 or older, you don’t need a license or permit to possess firearms at your residence, “temporary residence,” campsite, place of business or private property you own, provided that weapons aren’t barred there by other laws (more on that later).

Outside those boundaries, it’s “generally illegal” for anyone to openly carry a handgun in a publicly place or on a public street even if it’s unloaded, unless it’s in a place where it’s legal to fire a weapon (e.g., a shooting range). One notable exception: State law allows law enforcement officials in the 30 counties with a population of less than 200,000 to grant residents licenses to openly carry handguns.

Nor is it legal to have an “open and exposed” handgun in your vehicle on a public street or in a public place, even if it’s in someone else’s possession. So in order to transport a lawfully possessed gun from your home to another lawful place in your car, state law requires you to unload it and lock it in your trunk or some other container besides the glove compartment.

In fact, unless you have a California license to carry a concealed weapon, you can’t legally walk your gun to a car parked on a public street unless you carry the weapon unloaded in a locked container.

The broad prohibition on carrying guns outside the home could draw challenges now based on the Bruen ruling.

State law provides a few defenses for those charged with violating these restrictions. The most notable is that under California Penal Code Section 26045, carrying a loaded weapon may be justified if you “reasonably” believe it’s needed to protect a person or property “in immediate, grave danger,” or to protect someone from a threat posed by a person subject to a restraining order.

Even if you have a license to carry a handgun, California law won’t let you take it just anywhere. Some places and situations are off-limits. These include:

Beyond that, the local authority that issues concealed weapon licenses can add limits specific to individual applicants. These may include “any reasonable restrictions or conditions” that the authority deems warranted, “including restrictions as to the time, place, manner, and circumstances under which the licensee may carry a pistol, revolver, or other firearm capable of being concealed upon the person,” state law says.