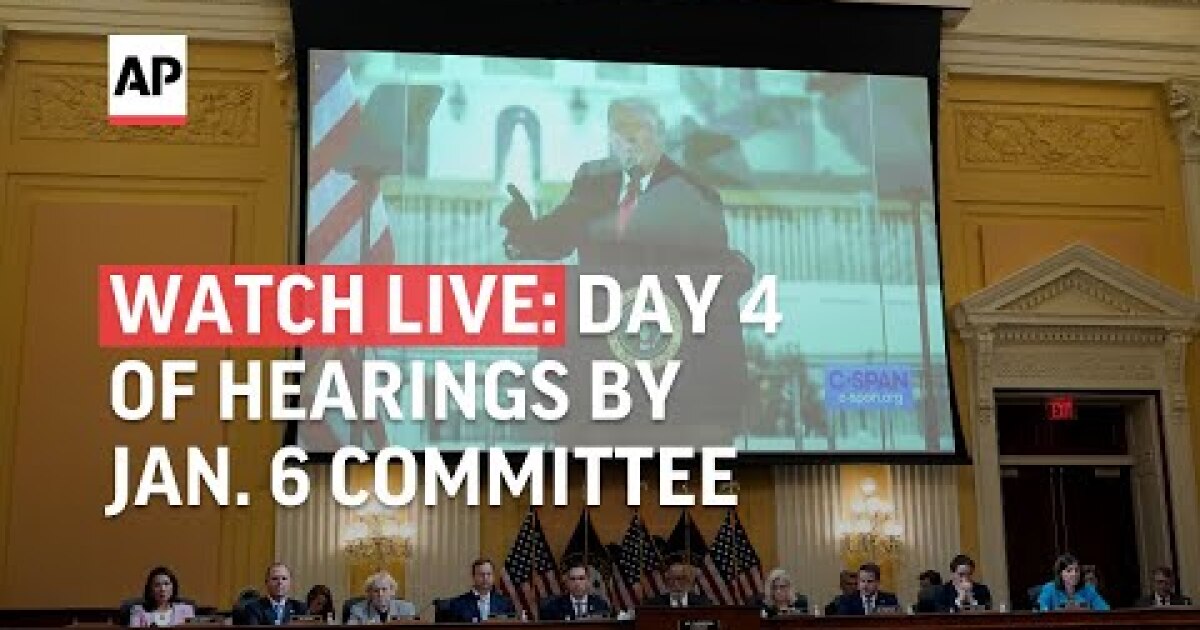 Tuesday’s hearing by the House panel investigating the Jan. 6, 2021, attack on the Capitol is zeroing in on Trump’s personal involvement in efforts to pressure state election officials to subvert the will of voters and to persuade lawmakers to submit false slates of electors backing him to Congress.

Bowers testified about the calls he received from Trump and conservative California lawyer John Eastman, and about a meeting with Trump attorney Rudolph W. Giuliani in which the former New York City mayor asked him to overturn the state election results after Biden won and instead submit a slate of electors for Trump.

Bowers said Giuliani pointed out in multiple phone calls that they were both Republicans and said that Bowers had legal authority in Arizona to remove Biden electors and replace them. Giuliani asked Bowers for a committee hearing to do that, and Bowers said he didn’t have such authority. He said Giuliani never provided proof supporting his allegations of fraud in the state’s elections, which included allegations that hundreds of thousands of immigrants in the country illegally had voted in the election.

Bowers said he was never given evidence of fraud in Arizona’s election.

“We got lots of theories, we just don’t have the evidence,” Bowers said Giuliani told him.

When Giuliani continued to press him, Bowers told the president’s attorney that he was “asking me to do something that is counter to my oath when I swore it to the Constitution to uphold it, and I also swore to the Constitution and the laws of the state of Arizona.”

“I will not break my oath,” Bowers said, adding that “it is a tenet of my faith that the Constitution is divinely inspired.”

Raffensperger was on the receiving end of Trump’s Jan. 2 request to help overturn President Biden’s win, in which Trump told him to “find 11,780 votes, which is one more than we have because we won the state.”

Sterling made headlines on Dec. 1, 2020, when he pleaded in a news conference for Trump and his allies to stop spreading lies about the election results.

The Justice Department is also examining the fake electors scheme, as are prosecutors in Georgia.

The House select committee is expected to highlight White House Chief of Staff Mark Meadows’ “intimate role” in the pressure campaign, according to Rep. Adam Schiff (D-Burbank), who will help lead the hearing. Meadows handed over a trove of emails and text messages to the committee before abruptly refusing to further comply with their subpoenas. The House voted to hold him in contempt of Congress, but the Justice Department has declined to prosecute him.

The committee hearing began with footage of a Michigan state senator, whose cell phone number Trump published on Facebook, saying he received 4,000 text messages in a few minutes. Pennsylvania House Speaker Bryan Cutler, who received daily phone calls from Giuliani and Trump attorney Jenna Ellis in the last week of November 2020, recalled protests at his home led by Trump’s former chief strategist Steve Bannon. The committee also showed footage of armed protests outside state capitol buildings, which Schiff called “a dangerous precursor to the violence we saw on Jan. 6.”

The second part of the hearing will focus on the vitriol and attacks directed toward election workers. Former Georgia election worker Wandrea ArShaye “Shaye” Moss was the target of a right-wing smear campaign and accused of processing fake ballots. The Georgia secretary of state’s office conducted an investigation and found no wrongdoing on her part.

Also on Tuesday, British filmmaker Alex Holder complied with a subpoena to turn over to the committee documentary footage he filmed during the final six weeks of Trump’s reelection campaign and video of the Jan. 6, 2021, attack on the Capitol. The footage includes exclusive interviews with then-President Trump, his children Ivanka, Eric and Don Jr., and son-in-law Jared Kushner as well as then-Vice President Mike Pence. Holder said in a statement he will sit for a deposition Thursday.