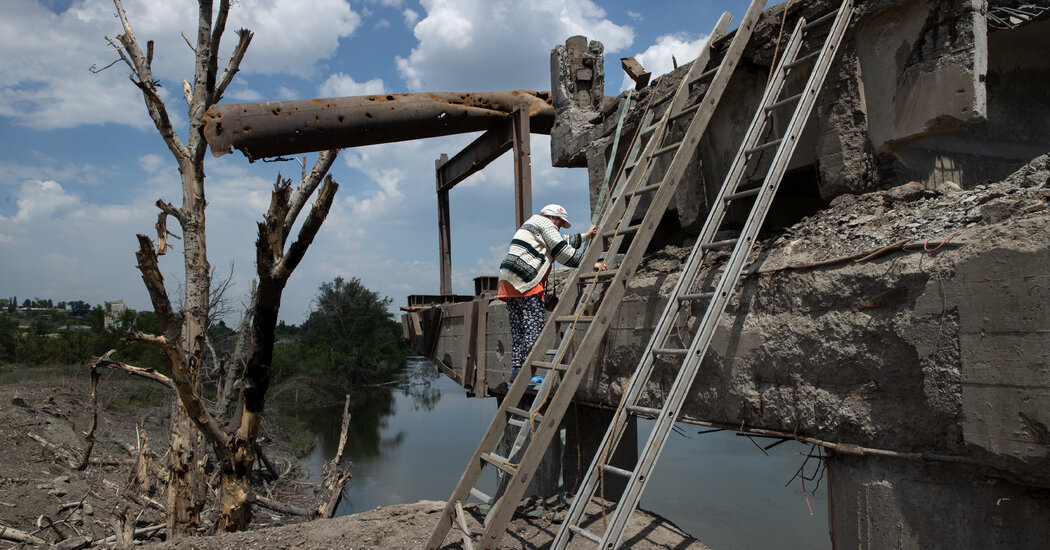 LYSYCHANSK, Ukraine — The woman’s mission was simple: she was going shopping, and she would not be deterred. Svitlana Zhyvaga just needed to cross a bridge.

But this was not just any bridge. The residents who lived nearby said it was mined. Ukrainian soldiers warned others that the bridge had been shelled and would likely be shelled again. But last Friday morning Ms. Zhyvaga, 54, woke up just before sunrise, climbed a ladder and walked across what is currently one of the most dangerous river crossings in the world.

“I am actually a thrill-seeker,” Ms. Zhyvaga said.

The bridge spans a roughly 250-foot-wide portion of the Siversky Donets River, which separates the eastern Ukrainian cities of Lysychansk and Sievierodonetsk. It would be completely impassable if not for several ladders connecting a collapsed section to the road above.

In recent days, the three bridges connecting the two cities were destroyed, Ukrainian officials said, including Ms. Zhyvaga’s bridge, leaving the Ukrainian forces all but stranded as they fight to hold their shrinking pocket of territory in Sievierodonetsk from advancing Russian troops.

The area is a critical battleground and the scene of some of the fiercest fighting in the east. Russian forces recently pushed through the Ukrainian front line south of Sievierodonetsk, prompting Ukraine to rush reinforcements to the site to stave off the risk of encirclement. Ukraine’s President Volodymyr Zelensky said earlier this month that the fate of much of eastern Ukraine was being decided in the battle for these two cities.

Combat in Sievierodonetsk has been street-to-street, while vicious pounding from artillery — with black smoke rising from the explosions — is an everyday staple on both sides of the river. The Russians control almost all of Sievierodonetsk.

The number of casualties among soldiers and civilians is unknown. Local authorities estimate it to be well into the thousands.

But none of that seemed to matter to Ms. Zhyvaga, whose fatalist detachment from the battle raging around her was common among those who still lived in the surrounding neighborhoods. Ms. Zhyvaga’s outing to Sievierodonetsk centered on a desire to buy some odds and ends. She was unaware that there was a small morning market in her own city.

She also seemed confused about the risks, not grasping that some of the most brutal urban combat of the war had happened parallel to her shopping trip.

“What is it, what has happened in Sievierodonetsk?” asked Ms. Zhyvaga, clad in flower-dotted leggings and a flower-adorned off-red shirt.

A reporter from The New York Times informed her that most of Sievierodonetsk was under Russian control.

With Russian forces in most parts of Sievierodonetsk, the bridges connecting the two cities are strategically important. Without them, Ukrainian forces have a limited ability to retreat to Lysychansk, which sits on higher ground. There, soldiers have begun digging defensive earthworks and erecting choke points with destroyed vehicles in recent days in preparation for the coming Russian assault.

It was clear: the Ukrainians were going to try to hold the city.

Though the military is believed to have placed a pontoon bridge somewhere along the river that might be used for evacuations, Ukrainian units in both cities are inching closer to being in a position similar to those that were trapped in the southern city of Mariupol.

Regional officials estimate that around 500 civilians, along with an unknown number of soldiers, are now hunkered down at the Azot chemical plant in Sievierodonetsk’s industrial zone. On Friday those officials said that an evacuation was next to impossible.

“The exit from the plant is possible only on the condition of a complete cease-fire,” the regional governor, Serhiy Haidai, said Friday on Telegram.

Residents call the bridge Ms. Zhyvaga crossed on Friday the Sodovyi Bridge, after the now-defunct baking soda factory nearby. Built around 1970, the bridge is the southernmost connection in Lysychansk to Sievierodonetsk.

“This is the last bridge that is left between the two cities,” said Oleksandr Voronenko, 46, a military police officer stationed in Lysychansk. “If anybody can evacuate on their own feet, they can cross this bridge. But there is no mass evacuation.”

Ravaged by Russian shells, the bridge, or what’s left of it, is an obstacle course of destruction, as if some unseen hand had tried to sand it off the face of the earth and finished halfway. The river bank around it is cratered. The trees are snapped and charred. Pieces of munitions litter the road, and a destroyed U.S.-supplied Humvee, sheared in half, is the only recognizable object on the bridge.

Ms. Zhyvaga, a self-described entrepreneur, strolled through the wreckage around noon unhindered, a shopping bag and purse at her side and her blue sandals delivering a striking contrast to the detritus around her. Returning from her shopping trip, she climbed down the ladder to the collapsed section and walked up a sheet of metal to cross a gap created by the collapse.

“Nobody stopped me,” she said, standing on the Lysychansk side of the bridge. “The military men stopped me to say hello, and that’s it. They asked me how to drive through and if the bridge is working.”

Ms. Zhyvaga didn’t know if she had spoken to Ukrainian or Russian troops, only that they spoke Russian. Her shopping destination, Sievierodonetsk’s central market, is also squarely under Russian control.

Ms. Zhyvaga’s ambivalence toward the uniformed men who stopped her during the seven-mile trip into Sievierodonetsk and back echoed in the neighborhood around Sodovyi Bridge, in Lysychansk’s Chervona district.

There, residents have been on the receiving end of near-constant shelling as Russian forces — unable to see the bridge because of the hills on its eastern bank — have unleashed artillery barrages not just to destroy the crossing, but also to ensure nobody tries to cross it. This focused effort has destroyed or damaged most buildings within a half-mile radius of the bridge.

But no one there seems to know who is doing this or why.

“It’s unclear who’s shelling this place,” said Svitlana, another woman who lives near the bridge. Like other residents, she declined to give her last name for security reasons. She has not evacuated, she said, because she has nowhere to go. That sentiment is common among the remaining residents of Lysychansk, who have been forced to retreat to their basements as their city burns around them and Russian forces inch closer.

“Who knows whether they are Russian or Ukrainian?” said Oleksandr, an older man repairing the window frames at 18 Trudova Street, a brick house just a few hundred yards from the bridge.

But, added Valentyna, another resident, “there’s a bit of a break between 12 and 2.”

Whether these people did not care or had been inundated with Russian propaganda designed to sow doubt in the Ukrainian government was not exactly clear, though Russian disinformation had corrupted residents in other neighborhoods in Lysychansk.

In those brief hours between shellings, the residents near Sodovyi Bridge seemed far more focused on going about their day and carrying out mundane tasks centered on survival than on who was winning the war or who was trying to kill them.

“You know, I just want a good life,” Ms. Zhyvaga said, the bridge now safely behind her and a shopping bag of apples and potatoes in hand. “I don’t know what they would give us — Ukrainians, if they stay, or Russians, if they come.”

“So everything is a question for me.”